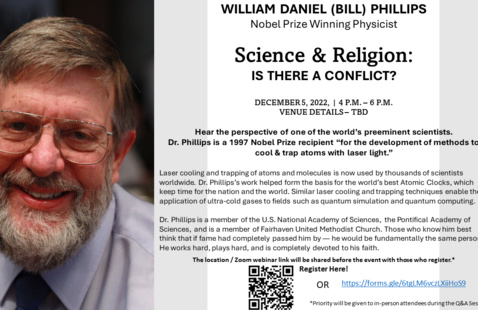 Martin D. Jenkins Hall, Auditorium View map
Add to calendar
Save to Google Calendar Save to iCal Save to Outlook

https://docs.google.com/forms/d/e/1FAIpQLSfNdC9NVnyw7bW6lDVrvedvNHB1VpwowQ7SCInUC0CSGR-F0A/viewform?usp=sf_link
View map
Add to calendar
Save to Google Calendar Save to iCal Save to Outlook

Science & Religion: Is there a conflict?

Hear the perspective of one of the world’s preeminent scientists.
Dr. Phillips is a 1997 Nobel Prize recipient “for the development of methods to cool & trap atoms with laser light.”

Laser cooling and trapping of atoms and molecules is now used by thousands of scientists worldwide. Dr. Phillips’s work helped form the basis for the world’s best Atomic Clocks, which keep time for the nation and the world. Similar laser cooling and trapping techniques enable the application of ultra-cold gases to fields such as quantum simulation and quantum computing.